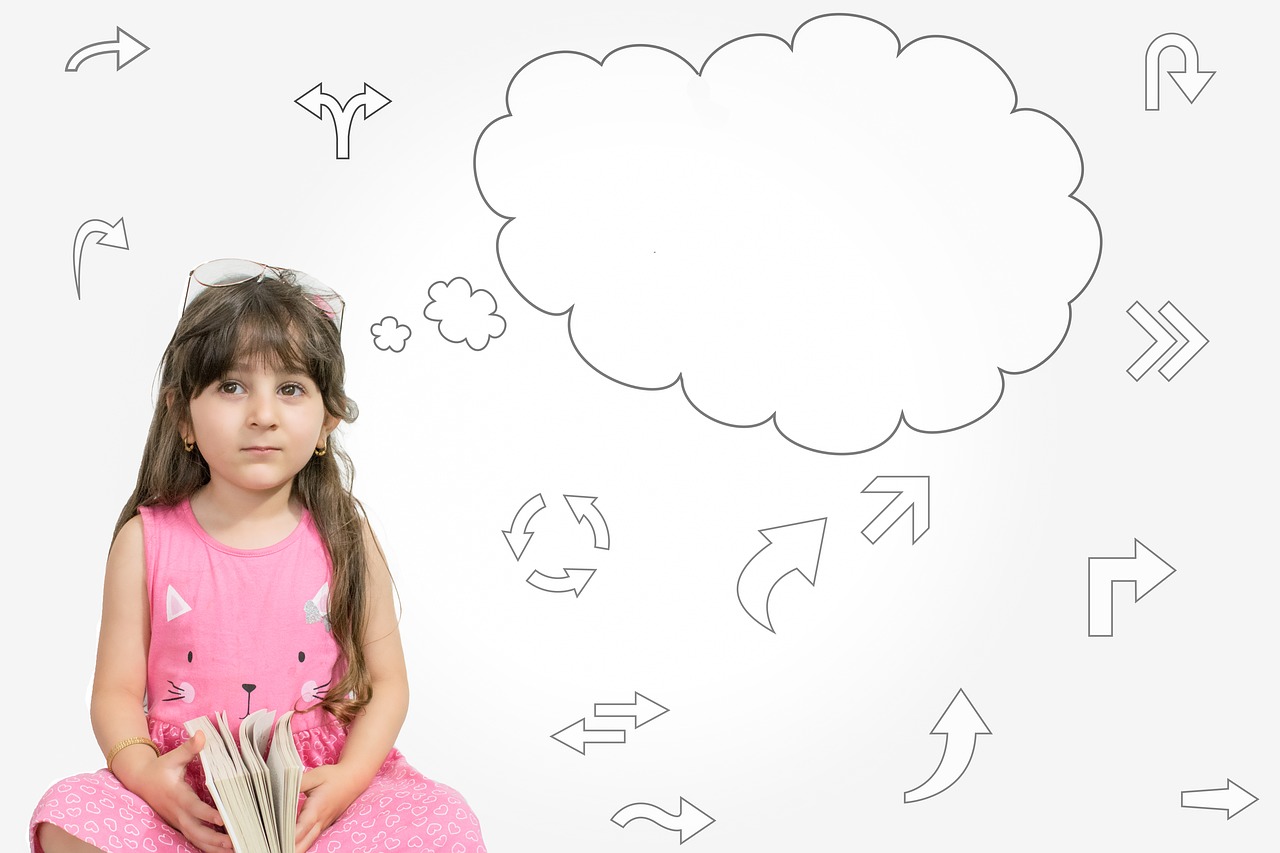 How theorists variously explain the relationship between language and thought.

Among the early approaches to examining the relationship between language and thought the behaviorists believed that thought was speech. Young children speak their thoughts aloud. This becomes internalized so that covert speech is thought.

The view that language depends on thought has been put forth by Piaget (1967). In the view of Piaget, language is only one of several possible ways in which the child can represent its knowledge, Piaget saw knowledge as being the precursor to language. First, the child has experiences, and then it uses language to represent that experience. Language is a symbolic system used to express thought. Essentially, Piaget was trying to study the relationship between language and thought from the point of cognitive centring. His own analyses of children’s speech led him to believe that up to the age of seven the child’s speech was predominantly egocentric.

Rather, for Lenneberg, language and thought are intimately integrated activities. Language is an essential part of cognition and is neither the cause nor the effect of it. Language is an operation of the mind.

An alternative approach to the relationship between language and thought comes from the theories of L.S. Vygotsky. Vygotsky (1962) believes that language and thought have different origins, develop in parallel for some time, and then enter into a particular type of interactive relationship. Vygotsky emphasized the role of generalization in verbal communication; things must first be categorized, and only after this can the signs involved in language come to represent the categories. That is, children form stable sensorimotor concepts before beginning to speak intelligibly or to understand. They master the sounds and many words of the language before placing linguistic resources in the service of their thought.

At about the age of two the independent streams join and the child’s behavior changes. The child seems conscious of the symbolic property and power of language. Thought becomes verbal and speech becomes rational.

Vygotsky describes certain processes in which language and thought are particularly blended. They include inner speech, in which the child uses language as an aid in reasoning. Verbal thought, forms of reasoning that are particularly dependent on words. Also young children often produce egocentric speech, in which the child’s speech reflects what is in its own mind without reference to any listener.

According to Vygotsky language originates in people’s need to interact with other people, while thinking originates in people’s need to make sense of the world. He also believed that language without thought can also occur, for instance in the process of repeating a poem learned by heart. So both thought and language can exist independently, but they overlap in the area of verbal thought.

But once a child has acquired language, then language acquires the monitoring thought processes and acting as symbolic representation. As a result, people develop the ability to engage in verbal thought and this ability allows them to extend their mental world. So language becomes a tool of thought, although it begins as an independent.

However, the person most commonly associated with the idea that language influence the way people think was one of Sapir’s students, Benjamin Lee Whorf. The proposal that particular languages strongly influence ways of thinking became known as the ‘Sapir-Whorf hypothesis’ or as ‘the linguistic relativity hypothesis’. It has two forms, the strong form, and the weak one. In the strong form, it is about linguistic determinism, the idea that language determines thinking. In other words, if there is no way to express a concept in a language, then that concept will not be available for people who speak that language. The weak form of the linguistic relativity hypothesis argues that it would be more difficult for people, who spoke that language to acquire the concept, though not impossible. Finally, Whorf concluded that is still does seem to make good sense to disentangle language from cognition and to study it in its own right.

Chomsky has argued that language is basically independent of thought (Piatelli-Palmarini, 1980). Chomsky maintains that linguistic categories are “wired in” to the brain at birth. Language does not need to be learned: it simply unfolds. All the child needs is minimal exposure to the speech of his culture. This minimal exposure ‘triggers’ language development, which is believed to occur independently of other intellectual activities. The fact that language develops in substantially the same way irrespective of the child’s intellectual skill is considered evidence in support of the thesis that language is an independent “organ of the mind”.

Conceptions of the nature of language have changed considerably since most of the theories were formulated, and people have occasion later to consider the implications of these changes for the development of thought. The old dichotomy posed by theorists such as Piaget, who originally saw language development as dependent on thought development, or Bruner, who argued for the opposite, is no longer an adequate framework for dealing with things as they are now.